While Cochlear maintained in December of 2011 that "less than 1% of its CI512 implants had failed since the 2009 introduction into the stream of commerce, the hard data and associated failure rates suggest an entirely different story. 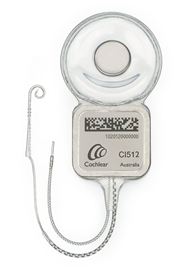 The idea of the study was simply to compare the cumulative failure percentage ("CFP") of the Cochlear Nucleus N5 (CI500 series) implant, differentiating the before and after voluntary recalled, unimplanted devices, to those of the Nucleus Freedom (CI24RE series) implant.

Therein, the cochlear implant procedures were conducted in their standard fashion while a database was generated by way of merging information gleaned from the operative case logs, an integrated clinical electronic medical records system, and an external database of devices maintained by Cochlear Ltd.

Notably, of the two-hundred, eighty-nine (289) implants the Nucleus Freedom CI24RE range at this institution, the cumulative failure percentage was 0%. There were 122 implants of the Nucleus N5 range device, yielding a staggering 9.8%CFP; Eighty-two (82) of these N5s were manufactured in advance of the December 2011 product recall and forty (40) were provided after the recall. The 82 implants manufactured in advance of the recall had only two (2) such associated, failures, while the forty (40) produced afterward contained a staggering ten (10) such failures.

The study acknowledged that the cumulative failure percentage (CFP) of the Cochlear Nucleus N5 series remains to be fully defined, and the 9.8% failure rate for the Nucleus N5 was significant. The rates of failure for the N5 implants manufactured before the product recall was 2.4%, and the CFP after said recall was 25.0! This constitutes a -nearly six-times, higher than the Cochlear-published value of 4.2% for all N5 implants registered globally.

Given the significance of the hard failure rates, Cochlear's on-call audiologists will perform an "Integrity Test" for the device to determine if the implant is still functioning properly, or if it otherwise suffered a hard failure. This Integrity Test Report will indicate that the device has "failed" a number of tests and Cochlear will make note of this in their files. It is very important not to sign any release with Cochlear if they provide any service or refund in relation to the failed device.

Attorneys Don Liddy and David Shoop continue to represent people nationally who were implanted with defective cochlear devices. If you have experienced a confirmed failure of your cochlear implant, you should call the experienced product liability attorneys at Shoop | A Professional Law Corporation today for a free consultation to discuss your legal rights.